Skip to content Skip to main menu
Home › Uncategorized › What a one handed grandfather clock is, and why they were made

I did a quick repair on this grandfather clock. I dont see many one handers so I thought I would do a quick article on them explaining… well, why they only have one hand.!

Before the invention of the pendulum , most clocks only had one hand and were regulated by a thing called a lever escapement which was in turn regulated by a fly wheel or balanced weights going back and forth on a spring. The link below is from the turret clock in Salisbury cathederal which was installed in around 1386 – 300 years before the pendulum clock was invented.

If you want to have a look at the Salisbury clock please follow the wikipedia link below.

The point about this weighted regulation on a spring is that it was terribly inaccurate because the oscillation of the weights regulating the clock overall was not particularly consistent.

By about 165o clocks were not expected to run on an accuracy of quarter of an hour a day. On that basis there was no point in trying to add a minute hand as the clocks regulation was not accurate enough to make minute measurement useful.

So, along came Christian Huygens and upset the entire apple cart by attaching a pendulum as the regulating device.

Now, if you dont know, a pendulum will always swing at the same rate on the same arc providing it is not slowed down by friction (which of course it is). The escapement wheel is designed to push the anchor at the top of the pendulum just enough to counter this friction and keep the clock in perpetual motion while its spring or weight is applying force.

Its a brilliant system because its cheap to produce and easy to adjust. The only other option up until the 19th century was to use a platform escapement which to all intents and purposes is what you will find in a mechanical watch. These wear out, can only be adjusted withing certain limits, and they are fragile. All this meant that a reasonably priced accurate clock made between 1658 and around 1960 uses a pendulum for regulation.

The problem with the “new fangled” pendulum clock in the first few years of its production is that it was so accurate it was possible to add an accurate minute hand. This might seem like a great improvement but actually the largely illiterate population didn’t understand how to read two hands. They were used to just looking at a clock face with one hand and reading what time it was to the nearest quarter of an hour. Imagine if we lived in a world where everything timed, e.g. meetings, events, scheduled tasks, was only planned to the nearest quarter of an hour!.

So from 1658 to about 1700 the majority of clock were produced with just the one hand. Two handed clocks did appear during this period but the majority were single handed. By 1700 two handed clocks were being sold BUT they still had the one handed markings. If you see a grandfather clock that has both minute markers on the outer chapter ring AND quarter hour markers on the inner ring then its was almost certainly made between 1690 and 1720 although some makers persisted with dual marked faces up until 1740.

Note also the half hour markers which, again, made it through to the two handed version but were marked for the second hand and 7.5 minutes, 22.5, 37.5 and 52.5 minutes.

An example of a clock head (my own John Mason London Clock) below. Note that the chapter ring appears to be steel – it is not, it is a slivered brass chapter ring produced by a silvering process that predates any kind of electroplating by a couple of hundred years. The black letters are filled with wax – if you doubt the autheniticity of a 1700 clock check to see if the roman numerals have been carved in and then filled with a black wax which should be cracking a bit and possibly the odd flake missing. 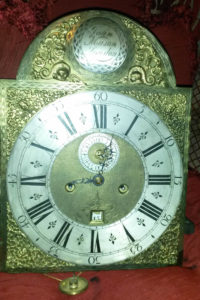 The clock below is a John Taylor clock from about 1680 -1700 and as you can see it just has the single hand and the inner chapter ring marks, which at first glance look like minute markers for a second hand, but are of course quarter hour markers for this single handed clock.

Incidentally the other thing that dates this clock to the period is the lack of an arch over the dial. These were common after 1700 so along with the one handed format we can take a good guess (without looking up things!) that this clock was produced within the dates previously mentioned. 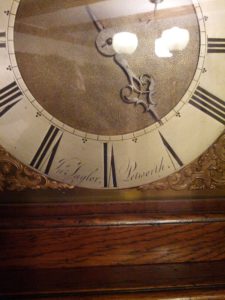 Heres a picture of the whole clock.