I love cuckoo clocks. Its as simple as that. I have a menagerie of the things. I repair anything from a wooden cage victorian to a 20th century electric Conran.

Electric cuckoo clocks sound like a step to far into cuckoo insanity but this is not the case and all the customers I have who own them actually prefer them to the purely mechanical equivalents.. They are great fun, often have features impossible on a mechanicals, and are reliable.

That said they do fail from time to time and need components replacing. I hold spares for most of the popular electric movements and mechanics so there really isnt any cuckoo clock I cant get back to singing condition.

Common problems on the electric cuckoos are:

FIX IT YOURSELF ADVICE: Before you decide you need a fix have a quick look at whats going on inside yourself and do a connector check. This involves removing the back panel of the clock and making sure everything looks like its connected. If it all is still connected then disconnect the logic board connectors and re-plug them back into the sockets. This is often enough to remove light corrosion at the contact points and get the clock working again.

If all else fails then pack up your clock and send it to me (give me a call first so I know what and when to expect). Ill find out whats failed and quote you for whatever component needs replacing.

The only caveat here is that I might not be able to match the sound of the cuckoo as different logic boards have different sounds and you cant get them “by sound type”, as it were!. If its just a mechanical failure and the cuckoo still works then I should be able to return it to its original configuration and settings. 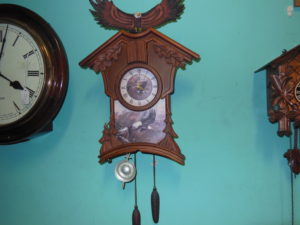 Oh and heres a picture of my 1860 black forest wooden cage with a fusee movement and delightful Dresden styling. Both do the same job and deliver the same joy.

The Dresden clock is up for sale at £3000 which is about £1500 overpriced to ensure absolutely nobody buys it. It belongs to me and all the people who come in here to gawp at interesting clocks – and thats the way its staying!. 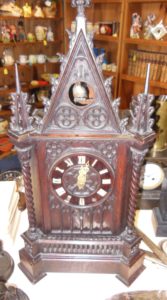