Skip to content Skip to main menu
Home › Uncategorized › Servicing A Grandfather Clock – when and why.

Some customers like to have their clock serviced every couple of years. Its a reasonable idea but its not necessary unless you have a very fine old clock (movement) and wish to extend its life by many decades in the future. I tell people this but they just say “I want it done get on with it” – I’m not complaining and fair enough.

The point here is that there are two reasons to service a grandfather.

You might think that a dirty clock will not keep good time. This is not the case. Most will run accurately until they stop. This is because a pendulum swings at the same rate no matter how dirty the clock is. If the gear train has enough power to keep it running then thats exactly what happens and it can ONLY really run accurately. It might be that you get some degradation as the clock finally grinds to a halt but, well, not really. So whens the right time to get it serviced and is it worth the cost?.

If your grandfather clock is running and has a shiny (ish) movement its unlikely it needs a service or clean. Just give it an oil using clock oil.

If the clock is black and matt coloured then it needs a clean and you can bring or send it to me.

The following pictures show one Im working on at the moment. This is the first of two clocks I am restoring for a customer and Ill be publishing an article on the next one which will include dial silvering and wax numeral restoration (I am literally fizzing with excitement about that one – see you Tuesday John).

Anyway this is John first clock and its a Nottingham from about 1820, so quite late, and I think this might be its first clean in about 100 years. As you can see the build up of dirt is quite horrendous and this clock has not run for 15 years. Ill post a picture of the finished article in a few days so you can see what it should look like.

Note a couple of things here. Firstly there is a LOT of tarnish. This oxide gets into the connecting faces of the components and will stop the clock from running. Secondly the clock has been standing for a long time and rust has actually formed and collected on the spiggots- you can see the rust stain around the spiggot hole. This means that on this occassion the spiggot will need some attention, and subject to testing, may even need re-bushing. Cleaning a clock in this condition also therefore means a bit of re-finishing of the parts on most occasions.

I have completed this work and the clock is now running perfectly on the test rig. Its always nice when you get to that stage as the rest tends to be fine tuning and cosmetics as opposed to getting the basics working in unison.

So.. as simple as it sounds…if its shiny its probably just good for an oil, if its black then give me a call!.

Its worth mentioning here that the majority of clocks I repair are exactly that – repairs and not “servicing”. Peoples first instinct is to assume a clock “needs a service” if its stopped running. Sometimes that is the case but further invetigation usually throws up some calibration or parts replacement that needs sorting out. Things wear out on grandfather clocks because they operate under quite large forces and they usually have a bit of age so wear is to be expected.

As always, I hope this article gives you a bit of insight into your clock and how to manage ownership of it.You are unlikely to be the last keeper of your clock so its all a bit philanthropic on the servicing side and… well actually that feels pretty good for most people.

Good luck on your diagnostics and feel free to give me an email for advice if you need any – I try and get back to everyone regardless of whether its leading to work or just somebody trying to work something out for themselves.

Keep on clocking – I’ve got your back!. 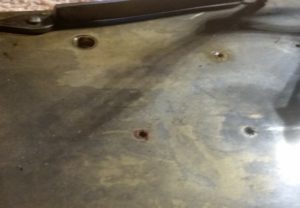