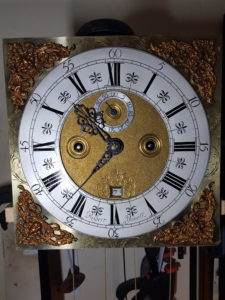 This Robert Youell went out this week. Overall the job involved restoring the face completely and the movement got a good service and tighten up generally. Things wear and the odd washer is required here and there as well as resetting certain components to allow for connecting face wear. We turned this around in I think under 4 weeks, but to be honest I did it quickly because I couldnt wait to get stuck into it.

My favourite grandfather clocks, as readers of this blog will know, are the machines from 1690 to 1730. For me this is when it really was all rock and roll – the enlightenment was ongoing and our scientific bedrock was being laid. This shows in the clocks.

Once the long case clock gets going in about 1660 things are pretty basic. It takes about 50 years for a guild system and agreed design standard to be accepted and used. The clocks start small in 1660 mainly as cage based movements. These are driven by a single weight driving the two essential trains for a chiming clock. By 1690 the two plate system with 3, 4 (commonly) and 5 pillar stantions to create a rock solid base, had emerged. Operations for chime management had been moved to the front of the forward plate keeping things organised, accessible and modular. This change and modularisation of the design, in my opinion, catalysed more innovation.  The clocks while mostly the same mechanical design, sometimes featured innovations such as shut off switches and chime set methods / gateways.

This Youell is a well made and has the following innovations.

It shows this chap to be a brave and clever maker.. The movement demonstrates a desire to produce something beautiful mechanically – tidy and precise, at the cost of complexity and the essential use of superior crafting skills including geometry and mathematics.

Engineering this tight means pretty thorough design and precise construction. I mean some of it can be done as a custom fit progressively but the majority of the clock has to be very accurately constructed because thats the way the chap wanted it to look. I should probably stress at this point that this is the first clock Ive seen like this and I see maybe one clock in 50 where you say “hey now thats really interesting”.  When the job is a restoration this is all the better as you get to know the clock very well.

The  dimensions (11″ which strongly indicates 1690 to 1700) and layout of the face are typically London but have subtle differences. The half quarter markers are abstract as opposed to fleur de lys and it doesnt say Fecit Londini after his name which was the form at the time. So its a bit of a contradiction because I believed that the majority of quality makers capable of the early innovations previously mentioned were operating out of London at that period.

I wouldnt have expected these mechanics in anything earlier than 1760 or so. But the clock face and particularly the centre chapter ring are very typical of an early clock. Its also a square face. This in itself doesnt date the clock particluarly accurately as clocks were made with arch section or square face from 1700, but arched only after 1700. So a square face is what you would expect on a clock with all the other pre 1700 features. It looks like a really advanced clock from 1690-1700 to me. The other thing that pushes me heavily towards this date is that the fittings on the back of the face plate are absolutely right and original. Hand made nuts for the spandrels that are unique to each spandrel and not interchangeable. Ive found that tthis dissapears or changes to a neater design mostly after about 1730. The ones on this clock really look “hand made” – you can see the file marks and the slots are off centre. Its the little things like this that give the best clue to a clocks authenticity and age.

The face is very well engraved. Theres not a lot of it but what there is is exceptionally high quality. The name and other script could have been written with a fountain pen its so stylised.

It was a pleasure to restore this one as it had not been done for I would guess about 100 years. In the meantime a layer of laquer had been applied and some areas had aged badly. We managed to restore it with traditional hand methods to near its former glory although we left the guilding on the spandrels intact and simply cleaned and lacquered them. The chapter ring, date wheel, and seconds chapter ring were all re-silvered to good effect and then sealed with oxidation resistant lacquer.