I recently replaced the movement on Enfield Grammar Schools old victorian hall clock. This clock had been build into the panelling so I went out to have a look as seen what needed doing. Mustafa does a great job there keeping everything up to spec and working properly so we agreed a division of labour on this job. I did the mechanics and he arranged to have new roman numerals made up and finished in an appropriate. Hats off to the tech design department who used the remaining metal numerals as a guide for making the missing ones – excellent job and I could not have done better myself quite frankly which is somewhat of an undertatement. You will notice that half the numerals were missing and the wrong colour when we started. At the end we have the clock restored to its former glory which matches the beautiful panelling as if it were new. Its great to get things back to the way they should be!.

On another point I have to say I was particularly impressed with the pupils at this school. Inevitably I became lost in the corridoors and had to seek assistance with directions. I apporoached the first pupil I saw and asked for a bit of help. The student (I wish I had made a note of his name) was one of the most polite and helpful people I have ever met; in or out of shool!.

Here it is before and after. 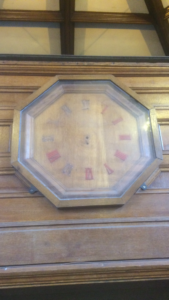 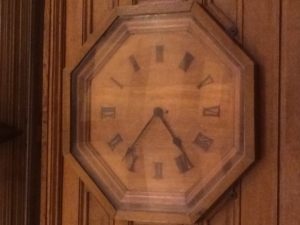