As you know, if you read this blog, or you’ve read the main page of the  site, I manage an antiques centre as well a the clock business with my son, Edward. Im only on site there on Saturdays now and Tom will be happy to help you in my abscence, however, to get to the point, the BBC pitched up to film Celebrity Antiques Road Trip.

I probably work a 50 or 60 hour week and enjoy my work. Consequently, I don’t watch much TV and when they rang (the day before they wanted to come along) I didnt really know the show or when it was on, what it was about, who was in it. Nothing. I just said “yes” as soon as they said “BBC”. Anyway I made an appearance in the haggling and paying bit . Yes I did fund the £45 discount myself if you wonder about that. Quite frankly I would have paid them to take the stuff and filled up their petrol tanks just for the advertising so it was an easy discount to give.

Overall I didnt rate the experience and wouldn’t recommend it to any but the most confident. The effect of some BBC boffin pointing a huge nose lens thing right into your face is astonishing. You cant get words out and because of all the adrenaline its really hard to concentrate on what you are supposed to be saying and in what order. Basicly the camera may as well be a slow burn death ray. I think I would have been fine had they got me on clocks but they bought a pipe. Damn.

The director was a really nice chap and gave me a fantastic edit, but the reality is that there is far more film on the edit room floor of me looking like Im having a stroke while waffling rubbish backwards.

They shoot the whole show with a crew of 7 which I found surprising, and no lighting and just one camera. You could have made the whole thing on an iphone from the way they used the kit and shoot progression – very clever actually. The other thing worthy of mention is that there are multiple shots of the same “scene”. What I mean is that that make you do it again if they don’t like the way you did it. This happened so much with me I think there must have been some sort of camera fault. That will be it – camera fault. Anyway I think a few of my clocks are in shot and you can see where I work from and take in clocks  on Saturdays at least.

Heres a link to the episode if you want to see me look about 1000 years old and tight fisted for 10 seconds of screen time. My 15 minutes of fame.

If they ring up again Im only doing it if they agree to do a clock repair bit and I want a script and some notice. And a dressing room. And a limo. And Im not working with Jim Carey or Costner. Imbeciles. 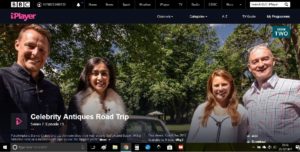