An old friend of mine, Richard Chamberlain, asked me to repair a secticon clock. Richard is a well known figure and authority on late 20th century design and a lot of his stuff goes out on museum tour. I was therefore reasonably nervous about handling the clock as Id not done a secticon before and wasn’t sure what to expect inside.

What I found was very pleasing, complicated and generally interesting. It turned out to be a 1.5v electro-mechinical movement with a modified carraige clock escapement driven by a two terminal copper coil motor. Whats hard about about that?.

Well everything really. Not least that the clutch connecting the motor to the escapement drive mounted above it was made from some sort of exotic fibrous material – a cross between hair and rubber is the closest description I can give. Everything is specialised on Swiss mechs. If you look at the comparable German metamec housed 606e from the same period everything in it probably came out of a gas meter or was standard in some way. I could mend the solenoid on it for instance or the coil. There is hope with machines like that but with the Swiss specialist stuff you can give up on any hope of replacement parts or component compatibility. You have to refurb whats left in some way which is why it can be so problematic.

I spent a lot of time examining the movement functioning and understanding exactly how the power from each engine turn translated into hand movement. Its actually too complicated to describe so I wont bother but there were at least 2 methods of power transfer in the gearing types I have not seen before, one involving a screw drive.

On this occasion the problems on the inside of the clock were mechanical as well as battery leak related.

Firstly it was cleaned with the right solvents in the right order to remove very light corrosion from the airborne acid which isn’t that concentrated – you normally get away with it. t was only the fact that the chaps at secticon had isolated the movement in a sealed plastic housing that saved the coil. Normally when a battery leaks in a 60’s electromechanical it destroys the coil insulation and thats really game over. Good design countered this problem and paid off.

The second problem was a relatively minor with a dislocated porprietary design pallet having over shot itself into a jammed position. This just slipped back into place when the balance wheel was over rotated. That took some finding and working out mind you – a very Swiss arrangement i.e. not seen anywhere else.

I didnt get round to finishing it until the night before I was meeting Richard for lunch. Consequently I couldn’t test the final fix as I didn’t have a battery, however, it functioned on a multi power supply at 1.1v just about so I thought it was probably ok.

Well it turned out it was ok and Richard was kind enough to send some of the pictures he has had done of it. It really is a very striking clock and currently values at around £1000 mark. Having worked on it I would say its probably well worth that.

Incidentally if you have one of these secticon clocks and dont know how to get the back off then turn the butterfly nut on the bottom to activate a release cam. This sometimes jams and cant be moved, in which case pull the two halves of the clock apart from the top. There is a spring clip that will release the two halves and no other fixings that will break. Straight forward construction. Don’t use a knife to lever the two halves apart – get a good grip instead and you wont damage it. 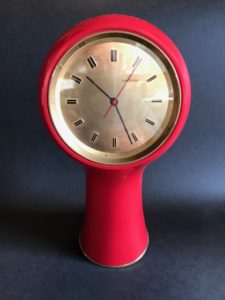 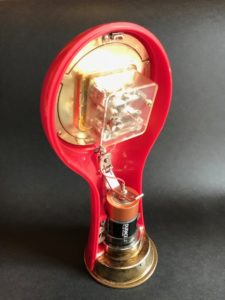