This is a clock I recently provided a mechanical reapair for. Its a particularly nice and rare Gould clock with the all important “Fecit Londini” inscription that means “made in London”. This might not seem much of a credential to have but this inscription was only used on early fine London guild member built clocks.

The face is original and features an early shutter bold mechanism that allows the clock to keep running while the weights are wound up. Bear in mind that it takes about 20 seconds to wind up the clock. Without the shutter bolt, the clock would be running 80 seconds slow over a month. At the time this clock was made such accuracy was thought to be both useful and prestigious.

The other great feature on these early clocks is the glass lenticle which shows the moving pendulum. It doesnt really have a practical purpose but it looks great and gives the cock more movement and life when you look at it.

The case is original and very well produced as well as being in excellent condition.

It had suffered some quite serious wear in the bell stantion. This was always going to happen as once I inspected the component it had a carbon streak fault line in casting. Im surprised this wasnt picked up by the maker during production but it was burried under some anvil work so…forgiveable!.

The more serious problem was the post for the hour wheel gearing had lost its thread and detached which had caused a complete disconnection of the front of face gearing and associated problems. With a bit of careful modification and testing we got there in the end using the original components. Its quite important to use original parts a far as abolutely possible on clocks like this although worn wheels and pinions cant be saved or adjusted for sometimes.

I’m often asked to date and value grandfather clocks. I put this down as 1690-1700 on the date due to the lenticle and face style.

These clocks becoming very rare in good condition, and while values have tumbled in the past few years they are now returning – specially at the top end things where this clock sits firmly. To buy this you would have to pay between 10k and up to 20k but the longer you wait on one like this (at the moment) the better and better the value is going to get.

I don’t care about clock values in the least and will work on whatever is put in front of me of course, but its always nice to get a famous name in the workshop and see what the top of the game was at that time. 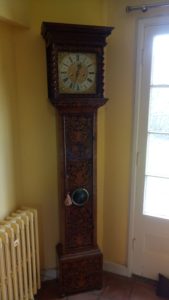 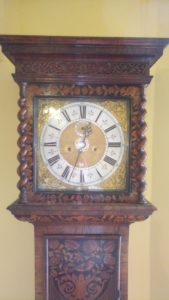 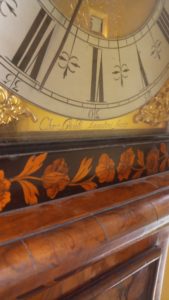