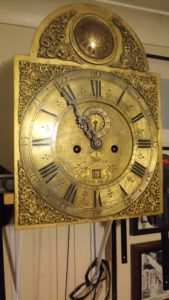 Ok so there were lots of exclamation marks in that heading. The reason for this is that this grandfather clock came to me for repair and restoration as pretty much a barn find. A “service” is not really what went on here to get this working.

A client had the common sense to snap it up despite its condition. I would love to say this is because he read my last blog post, but alas, this is not the case – just a huge coincidence.

At any rate I thought I would put up a “before picture” up as I plan to do a follow up article showing the finished job. I wish I had remembered to take a photo of the spider and grime infested movement which is now clean as Im half way through the job. The reason I didnt was because, quite frankly, I wasnt sure if this one was actually going to run. The escapement teeth were bent and the cog was mounted 3″down the movement plate which is very odd. Also the escapement wheel itself is only about 70% of the diameter you would expect in a “standard” clock design. The whole thing looked underpowered and sensitive to changes in the power delivery generally. That was until I realised the weights were Victorian replacements and the wrong size. I swapped them out for the right articles and its running fine now on test. Thats the thing with these non-runner barn finds – you are never quite sure if you are dealing with one clock or a Frankenstien of several clocks reanimated in a windmill by a lighting bolt 100 years earlier (never to work again).

So, the face is very “London” but the movement has its own character of design. It shows, very ineterestingly, how even early on the makers started to play with the design to see if they could better it. In this instance it appears to have happened as soon as the maker was released from apprenticeship and went to expand into the London supra-region and further. It just shows things dont really change at a human level. If you try and hold people back from innovating you wont be able to do so for long.  Epping was a town outside London at that time and so the Guilds influence starts to be deviated from in this clock for this reason. Its not dramatically different and its all the same cogs doing the same thing but slightly differently put together, and actually, in a more sensible way from some respects. I use the word repect accordingly – its a good job. For instance, the rack has an L shaped bend that replaces the stop peg arrangement you normally find – why did nobody else do this? Its a great idea that is stronger and easier to produce. But then….guilds.

When I get a really old clock like this in I tend not to overdo the clean. Its because the brass plate is often badly mixed alloy. You see this on really old grandfathers quite a lot. There are visible patches on the plate where copper is the dominant colour as opposed to the brass gold lustre you would expect. This is only exacerbated by a chemical clean with the sort of quite aggressive compounds you have to use to get a “high shine” I have found. Before modern chemistry in the 19th century the chemicals used in clock cleaning took off the top layer of oxidation from the various surfaces, however, due to the infancy of metallurgy and the cost of the materials involved the mix of copper and zinc could often be in a raspberry ripple style where one element, zinc or copper, was the more dominant element in a particular area of the plate. Acid loves eating zinc but not copper so it eats into the zinc first on the surface leaving the largely inert copper atoms. This is often the reason the plates appear to have copper patches on them where acidic cleaning compounds have been used in the past centuries.

Im going to bang on about this for a bit. Copper is a particularly difficult metal to dissolve with acids and is one of the two metals in the alloy brass; the other being zinc. You may remember from school that copper only really reacts with nitric acid so in cleaning brass plate a nitric acid based cleaner will skim the atoms of copper and zinc off at the same time.

Nitric acid [HNO3] is difficult to make. Specially in concentrated form. Hydrochloric acid [HCL] on the other hand is simply made by passing chlorine, an obvious green gas produced in many reactions, through water. I think its highly probable that HCL was used as a cleaning agent early on in these clocks service history which explains why poorly alloyed brass shows as patchy copper on many of the really early clocks. HCL will just dissolve the zinc, not the copper, which remains on the surface of the plate as if the plate was copper plated!.

Other than its early metallurgy the clock also shows its age in its hand made qualities. You can see the file and cut marks, and no two components, such as bridge screws, are the same.

Can you imagine that today?, something hand made because it is difficult, not because it just adds cost value. Its very hard to find something hand made these days. The term is used for “hand assembled” in many cases and I think Morgan Cars are about the last big company to value the skills required to make the car more than the advantages of higher production.

In time, after the next solar flare that wipes most computer data and returns us to the Victorian era, Morgan and companies like them might do even better than they are today i.e. still make cars when the iphones driving all the other cars become door stops and drinks coasters.  Im just waiting for that solar flare quite frankly. Ill be a God in the post apolocalypitic world. Take away most peoples computers and they are, as individuals, economically functionless. Ill still be mending clocks, and without clocks its really hard to organise anything at all. All you will have to do is find me on Google and….ahhhh I think I may have spotted a flaw in my plan.

Nevertheless, I love this. It really makes you feel like you are working on history and are responsible for carrying it forward. This clock was made 300 years ago by a person. He signed it. He has his immortality in my hands.

This is specially the case in this instance. The client has done the research on this one and found only one other clock by this maker on public record. So this may well be the last clock of his one day.

Anyway this one is getting a bit more love than the others although its hardly possible as I go bananas about anything pre-1740 for reasons I published in my last article. Clocks in the first 80 years or so of Grandfather production tell the whole story – a visual nexus of historical information and provenance.

Heres the chemical reaction for copper with nitric acid. Because Im a geek.

The letters l, s, aq, & g refer to the state of each compound, l is liquid, s is solid, g is gas and aq means dissolved in water. Boring. Sorry.

Note that the ratio of Nitric Acid to Copper for this reaction is 4:1 or it doesnt continue. That information you will need if you need to makes some laughing gas. To do this get some conc Nitric and stick some 2p’s in it. A brown gas comes off. This is laughing gas for the most part.

Or read a funny book which is very much less dangerous. Infact just leave it. You will have to anyway as you cant buy Nitric acid anymore due to its use in illegal drug manufacture – its all licenced and tracked and big brothered to an Orwellian degree. 10 years ago you could buy it by the gallon and have it delivered.

Personally, with the exception of modern pharmaceuticals, overall we have gone backward technologically in my opinion.

I actually need a pocket watch with a chain and my car keys on it but you cant buy a simple device like that- or give one to your teenage son as an alternative to a mobile phone. This is because a watch and key chain is unable to advertise to you and track every single thing you do and who you talk to and what you like and when you go to bed and how you get to work and when you eat and what you eat and who you talk to and when.