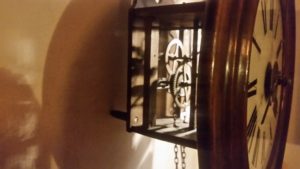 You dont see many of these. They are not that rare but far from common. The obvious difference with these is the abscence of a front and back brass plate – it uses wooden stantions to hold the spindles. The spindle holes are brass lined so from a functional perspective its every bit as good as a brass plate solution, however, it takes a lot less engineering to produce. Its a carpenters clock really.

It was in for a full service so it needed stripping right down. If you do one of these its not easy to work out how to get it apart without pulling joints apart!. Don’t do this. Look for one of the pillar feet having what looks like a slipway in it seating. Pull the pillar out via that slipway and the rest is just lego.

If the feet of the clock have dissapeared (a common problem – they fall out and get lost), then you can make new ones. I hand carved these from 12mm dowel and then applied an antiqued finish. You don’t need to do this and its fine just to paint them black but if you dye the wood a medium stain and then smear black paint on by hand you can achieve a very convincing copy of the originals. I give too much away on this blog I suppose but if your maniac enough to start DIY on one of these then good luck to you and I applaud you. I’m all for people having a go and positively encourage it.

Back to the movement.

The only other place I have seen these wooden cage movements is on mid Victorian Bavarian cuckoo clocks with which they share a great deal in common, although this clock has a single slot count-wheel as opposed to a cuckoos normal 12 hour chime count-wheel with 12 slots on the wheel. In the case of this clock that single action count-wheel releases the chiming mechanisn into free fall and lots of alarm bell noise. You stop the clock by simply turning the dial on the front that changes the time the alarm goes off.

Its a clever and simple arrangement. I should have taken a video as that would have explained it much better than my written attempt. Never mind, pictures speak a thousand words. Even if you didn’t really get how it worked from my explanation you can see the clocks simplicity from some of the photos.

I’ve shown it assembled as well as with the cage stripped of cogs for cleaning. Its interesting that the cage arrangement made it easy to put the drive train of cogs in front of the chiming train as opposed to side by side. This is not possible in a two brass plate arrangement where the trains must stand in line like soldiers next to each other facing forward held in place by the plates.

Frankly Im trying to work out why more clocks were not made this way. Its cheaper and more efficient all round.  In terms of complexity the German ones run a chime train with a matching cuckoo so it proves wood is not a material that would hold you back from increasing functionality. It is rather a large movement for a simple clock mind you. And the large cogs don’t require absolute positioning because the teeth of the cogs are large and don’t need such and accurate meshing.  So I suppose it has its limits in terms of physical scale or the ability to scale down.

I still prefer it to a brass mechanical that does the same thing.

Also this is only going to increase in value. You can just tell. 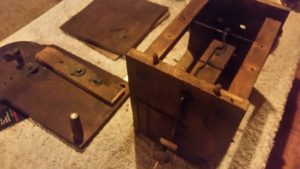