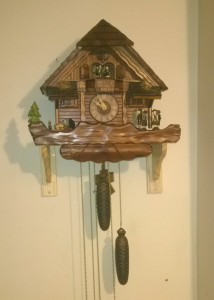 As well as the more conservative wall clocks I repair the delightful cuckoo clock. Please ring me for a chat about it – its has to start with a chat when its a cuckoo clock!. Please first have read about a recent job and have a quick click on the 2 second video to see one working from the back. I inlcluded that because I wondered how many owners might not have seen what goes on in the inside – its as much fun as watching it from the front to be fair. Anyway….

This repair took a very long time at 30 hours which had to be completed in a sequence of three contiguous shifts. I repaired it and I wont go into detail as its quite boring. What is not boring is the clock overall. Its an exciting frankenstien fairground ride sort of clock with the hallmarks of insanity.

Every clock I repair or refurbish is new to me. Its quite rare to work on an identical movement model simply because of the sheer quantity of movement types that have been produced. Add to this the fact that many european clock manufacturers bought in movements from competitors and you start to see why.

This means every clock repaired has to be understood mechanically before you really get to work on it. You have to check for a number of mechanical features and then work out how they interconnect to achieve the overall objective.

The following pic shows a rear view of the clock on a wall jigg. Note the flexible lighting at standing eye level, which you soon learn is the only way to work on these things. The weights are long and the head is oddly weighted. In addition the drive chain has a complicated route and can snag if not installled at the right tension. 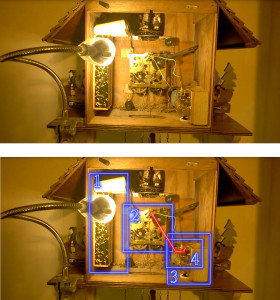 Understanding a clocks mechanics to the point where you can see it all working in your minds eye, is a hard thing to do with a cuckoo clock bacause its “modular”. It is infact 4 separate systems synchronised together, each with their own routine that they execute when triggered. For example, the music box (diagram item 4). This is released to run its tune at the alloted time and then brough to a halt again by a lever (diagram red line) dropping from the main movement (diagram item 2).

At the same time as the movement is starting and stopping the music box, it is also pushing the bellows (diagram item 1) via a lever that makes the cuckoo sound which is two tone and has to sound right on the timing. As well as this, the movement is running the gears that drive the automators that make the figurines rotate to a set patern. All this has to work together like a brass band.

There are no settings or markings evident in the clock – nothing to go by if your trying to work out how to synchronise everything correctly. Thats really why you need somebody like me to look at this. While I completely advocate self service and publish tutorials on this blog, this is a job for somebody experienced.

Fundementally these are complicated clocks to repair overall, although in terms of thier mechanics they are no more complicated than something like a vienesse regulator wall clock…its just the way is all arranged  in there and the quantity of separately functioning, but interconnected, units.

Not surprisingly all the parts are clearly hand fitted internally with screw holes and positioning having been decided at the time the clock was being assembled. The wires that constitute the levers between the movement and the components are all hand bent to avoid obstacles, sometimes into convoluted shapes.

These things are a delight to own even if you think you wont like one. You only have to see a good one working to fall in love with the things. This two second vid shows it all working away.

I suppose the tall and short of this is that if you would like me to repair your cuckoo clock I will need to have a good look at it before quoting a price. Bear in mind that the job above was a complete rebuild and reconfiguration. Your clock might be as simple as a jammed linkage in the chain which is straight forward to adjust.