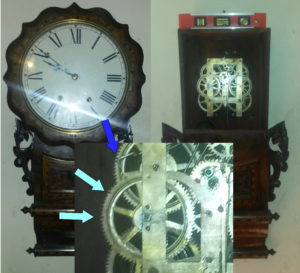 This fantastic clock is probably a Walsh or Anosonia. Its better quality than most so probably walsh. Its a computer and I happen to know the movement type was patented in 1872. Alan Turing invented his machine in 1936 and was hailed as a genius. Us clock dudes had been doing it for ages we just didnt wave our bunsen burners around and start whooping like turing. Heres the bit from wiki about turings machine. My (Davids ehem!) clock does all these things. From Wiki…
The Turing machine was invented in 1936 by Alan Turing,[11][12] who called it an a-machine (automatic machine).[13] With this model Turing was able to answer two questions in the negative: (1) Does a machine exist that can determine whether any arbitrary machine on its tape is “circular” (e.g. freezes, or fails to continue its computational task); similarly, (2) does a machine exist that can determine whether any arbitrary machine on its tape ever prints a given symbol.[14] Thus by providing a mathematical description of a very simple device capable of arbitrary computations, he was able to prove properties of computation in general – and in particular, the uncomputability of the Hilbert Entscheidungsproblem (“decision problem”).[15]
The picture shows the clock using what is effectively a punch card system based on a cog with the “holes of the card” being extra deep cuts in the cog teeth spaces. These are spaced out at 1, 2, 3 etc teeth intervals.
The blue arrow shows the lever coming down and the lighter blue arrows show where it will stick as opposed to being read as “pass” or blank or whatever!.
As usual clocks are the answer to everything earlier than everything else.