This is bit of local interest so some of you may have seen this clock working at Crittall Windows in the 50’s. It was given to my friend by a chap called Eric Masters some 20 years ago. If dont know if Eric is still alive but a big shout out of thanks to him for carrying the flame on this clock for a while. 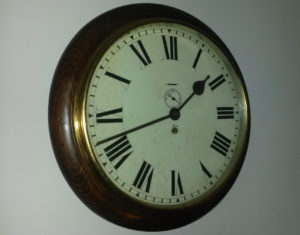 These local factory clocks are becoming valuable now. They hold memories for a lot of people and so demand is high when they become available. Quality varies but this clock is top end for the genre. A Courtaulds clock recently sold at Bocking Auctions for around £400 (2015). Compare this to the same clock without the factory connection and you could easily purchase an example for £50 – £100. The one above has solid provenance but it would have really helped it to have the factory name signwritten on the face as was the fashion at the time. You cant have everything I suppose and the bonus feature on the face is the second chronometer. Nice tick too.

This clock is fundementally awesome and works as well today as it did when it was being used (although it did need a service clean and complete tear down to component level). I work on a lot of different types of clock movement. Its unusual to do exactly the same movement more than once – there is a fantastic variety although they all incorporate various sets of features effecting accuracy and logevity. Its really interesting to see how these features are icorporated in various ways to deliver the best timekeeping for the environment and purpose of the clock. 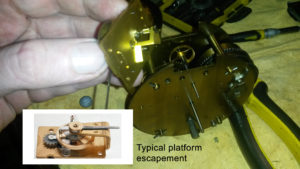 Platform escapements are used in portable clocks because you cant use pendulums for obvious reasons. They are expensive to produce and cross the line into watchmaking engineering skills. Where appropriate pendulum regulation on clocks is the norm, platform escapements are only used where needed due to cost. The point about platform escapements is that they are reliable and accurate on a ship for instance, or in transit. Carriage clocks rely on them exclusively as their core time regulation component. They are also self contained and modular as you can see from the accompanying picture. This being the case, the rest of the clock components e.g. the spring, and the wheels, do not require the same production precision and will still add up to an accurate clock when assembled and set running.

That is, if the clock is fully wound of course…. which takes me to the subject of the next awsome feature – the fusee mechanism.

The point here is that while a carriage clock is accurate, the amount of time it runs for before it needs winding will vary with the age of the clock. Thats no good in a factory when the time the clock shows really counts for timesheet and production schedules.

The engineering problem is that a spring delivers more power the more tightly it is wound. You will have noticed that if you wind a stopped clock the key will turn easily at first and then tighten as you proceed to wind. This of course means the torque provided is higher when fully wound and fades as the spring unwinds.

Clocks are engineered to run on only the amount of power provided by a couple of key turns. This means that the clock will function from fully wound right through to a couple of winds short of untensioned. This all sounds fine until you factor in the weakening of the spring over time.

Despite the best efforts of the metalurgists and steel makers, spring steel has a lifetime. It gradually loses its rigidity through fatigue caused by weekly winding over many years. The other thing I have noticed is that I often get clocks that have not run for years but have been left fully wound for that time. The first thing people do when a clock stops due to mechanical failure is wind it right up to the hilt, followed by stowing it away for 20 years. In my experience this general wear translates as and 8 day clock only actually running for 6 or 7  days of its spring cycle once its about 50 – 100 years old.

To address this a fusee mechanism is employed on the Crittall clock. This is ingenious.

Rather than power the clock directly from the spring the fussee wheel acts as a variable ratio gearbox for the delivery of  consistent and adequate torque to the gearing. The real coup de gras on this is that with the clock fully expent the spring can be tensioned against the connecting chain. It means that even when the clock completely unwinds the spring is still under some tension and there is no “fade” in the delivery of power. Because the chain is a fixed length you get exactly the same amount of turns on the winder every time its wound. 8 days means 8 days with one of these. 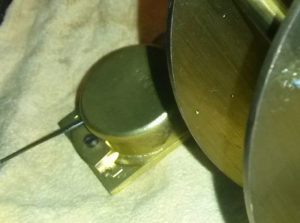 Another quick point on this – ive not seen a covered platform escapment before as on this clock. Its a cap to dust cover for the flywheel and tiny spring. Smaller components in clocks are sensitive to dust build up and rememeber.. this was used in a factory, so again, another feature incorporated spefically for the clocks environment. I forgot to get a picture of this specifically but was lucky enough to snap most of it in another shot.

If I were looking for a wall clock and I had a choice of anything under £500 this would come close to the top of the list. Its functional accurate and reeks of confident competent design and engineering. The ultimate presitige kitchen clock!. This one isnt for sale but keep an eye out at Braintree and other auctions and you may well get lucky – Ive seen 3 in a year go under the hammer.

If anybody knows this clock please do get in touch. I would be more happy to publish and attribute any information as an addendum to this article. Email me at admin@braintreeclockrepairs.co.uk