Skip to content Skip to main menu
Home › Uncategorized › An unexpected clock repair that should have been done under the manufacturers warranty! 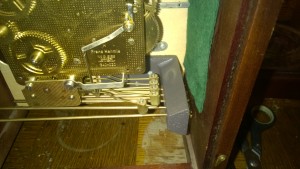 While out at a customers house installing a repaired clock I was shown this rather nice bracket clock from the 1980’s. Its whats knows as a jewellers clock which means a jeweller will buy in good quality unbraneded cases and movements allowing them to assemble and sell thier own clocks. This was common practive before 1900 or so as most clocks were still being hand built to some degree at that point. The practive still exists today with things like Burberry watches that use another manufacturers high quality movements, but not so much with larger clocks.

Anyway I was being shown this clock and I decided to check the chimes out. The tune that emerged, while perfectly accurately synchronised and delivered… .sounded wrong. I commented to the customer that it sounded like the chap in the factory had installed the mechanics for a westminsted chime and the chime bars for something else!. The customer said that he had thought he bought a westminster chimebut had only discovered this was not the case when he got it home.

The movement was a reltatively common Franz Hermle 350 series (350-021 to be precise) so I knew that it would be capable of taking the westminster chime mechanics if I could find them.

I took it back the my clock  cave, lit the candle, and proceeded to investigate..

It was obviously working perfectly in terms of its beat and keeps excellent time. You would actually expect this from a clock that was made by a good manufacturer with a modern mechanical movement, so no surprises there.

I took it apart and halfway through recognised a couple of components I had seen on a westminster chime clock that were specific to that type of chime. It didnt make any sense until I realised that the chap who built the clock had fitted the chime bars in reverse order. This resulted in the middle two notes being in the right places pretty much and the top and bottom reversed. You could still recognise it as the westminster chime sequence if you knew thats what it was supposed to be, but very badly out of tune. 30 years of that.

A fast clock reapair and a great story!. If you have any similar stories I alwasy enjoy hearing such stuff so either post a comment on this page or send me an email and Ill publish it up on this blog (anonamously if you prefer). 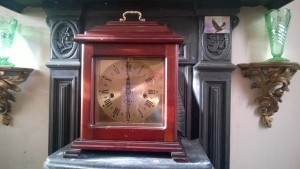